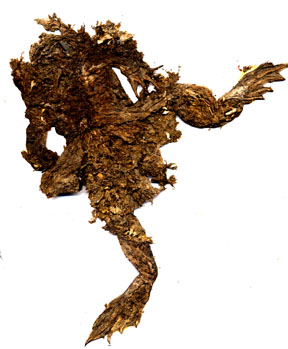 Although found in abundance in and around Killville, little is known about this mysterious amphibian. Unlike most amphibians that can usually be found in swamps and woodlands, the Flat Toad apparently favors the hard dry surfaces of roadways and parking lots. They can also occasionally be discovered underneath rocks and construction debris. Their only natural enemy seems to be the common crow, often seen dining on the juicy delicacy by the side of the highway. The locals also consider them a tasty treat and suggest frying them up with a little butter, oregano and beer.

A live specimen has never been collected so the Flat Toad's life cycle remains a mystery. "They just seem to appear out of nowhere as if they fell from the sky." states Professor Richard C. Dunn formerly of the University of Massachusetts, "I've spent the past forty years trying to find out where these little critters come from. Got hit by cars twice, I tell you, it's enough to make you crazy."

Someday the puzzle may be solved but until then if you find yourself driving through Killville keep an eye out for our little cold blooded friends. And watch out for the professor too, the last guy that ran him over had twelve hundred dollars damage to his car.